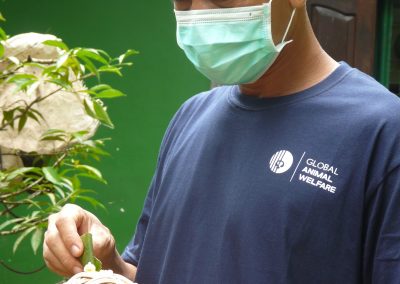 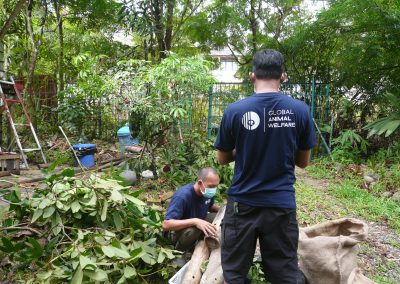 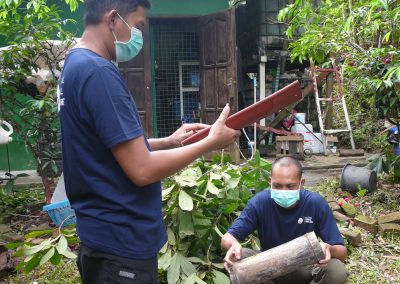 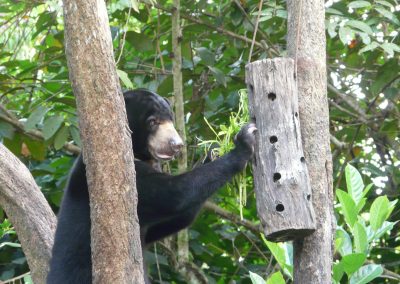 Sun bear, Pedru was separated from his mother when he was just a young cub. He had been kept illegally at the home of someone in South Kalimantan and brought to the KWPLH centre at the age of 1.5, weighing only 11 kg whereas a young male bear of that age should weigh close to 30 kg. He was severely malnourished and dwarfed in size. His first year on earth has been extremely traumatizing to his physical and mental state.

After Pedru was rescued, he was initially housed in a separate cub area with another young female cub after which both were slowly integrated with the 5 adult bears already residing at KWPLH. Pedru’s mental and physical health both improved, although he is still much smaller than a male sun bear should be at his age. But Pedru’s behaviour started to change some years ago, where he developed high anxiety around some of the other bears after he got into some fights and chases. Pedru developed a severe lack of confidence and was often in a state of high alert. This started to worsen over time and Pedru became reluctant to go into the enclosure for more than 1-2 minutes being skittish and walking at speed. Upon return to the inside holdings he would pace. His preference was to remain inside the holding, often pacing and displaying other abnormal behaviour.

At the end of February 2020, with the help of Global Animal Welfare, Alma went to Kalimantan to help restore Pedru’s self-confidence. Pedru was firstly put on “Bach flower remedy” which can support animals with traumatic pasts, anxiety and a lack of confidence. Alma and bear keepers directly implemented an extensive enrichment schedule for the holding area. They started to remove the factors that made Pedru nervous as much as possible The outside enclosure was adjusted with an extra fence and extra foraging log piles for Pedru. The fence helped block visibility for ‘unexpected people and disturbance’. Pedru was initially only trained to recall outside when it was absolutely quiet, with no visitors and no other bears and he was always able to return to holdings whenever he chose to do so. The aim was to create only positive experiences for him, take away all negatives in every situation and provide him a sense of control.

In the holding area Alma and team started intensive integration work with the other bears. Pedru became more comfortable and initiated contact with all other bears. Controlled play sessions with the friendliest bear Batik were scheduled every other day to boost his confidence. He became increasingly familiar with how to behave and wrestle like a bear. Pedru’s confidence grew and his fear of the other bears reduced and the others expressed mostly positive behavior towards him.

Pedru has still a long way to go, however he is able to go outside with 2 other bears and spends more time in the outside enclosure. This is an incredible result in only 1 month, the result of dedication and hard work from the entire team.

Unfortunately, due the outbreak of the coronavirus Alma had to depart earlier than planned. “I am hugely disappointed that I needed to leave, however I will continue to provide daily support and monitor Pedru’s behaviour from overseas”.

Gabriella said: “A great thank you from the whole Pro Natura and KWPLH sun bear team in Kalimantan to Global Animal Welfare and Alma’s help with Pedru, and we very much hope that this will be an ongoing collaboration.”